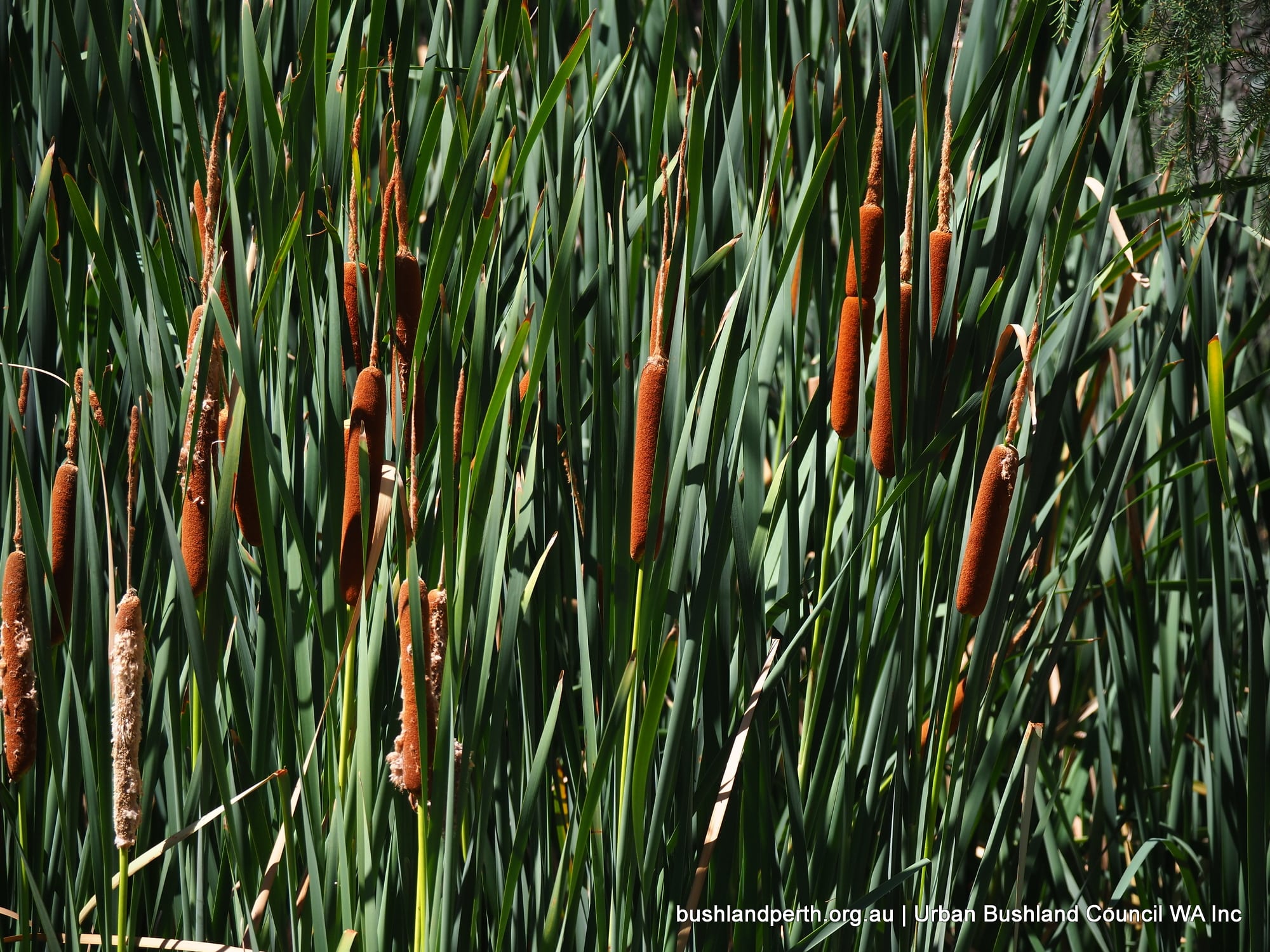 T. orientalis are originally from eastern and northern Australia, temperate and tropical Asia and New Zealand. It was introduced as a food, medicines, soil stabilisation, biomass, fibres and water treatment. T. orientalis is very similar to the native Western Australian species T. domingensis. Check with Florabase if you are unsure of identification.  The two species are difficult to separate and intermediates have been found.  And a cautionary note – management of Typha may impact on waterbird roosting sites and habitat. Check with management plans before weeding.

This weed is a rhizomatous, emergent, stiffly-upright aquatic perennial,growing to 4.5 m high. They flower in summer and produce tall spikes of brown flowers. Flowers are monoecious (individual flowers are either male or female, however both sexes can be found on the same plant) and they are wind-pollinated.Reproduction is primarily seed but can also be by rhizomes. Seed is dispersed by wind, water and movement of soil. Seedlings can flower after 6 months. Plants senesce in late summer after flowering. New shoots that are produced in autumn grow slowly over winter. The maximum above ground growth occurs during months of higher temperatures and long photoperiods, whereas productivity of roots and rhizomes is highest during low temperatures and short photoperiods. Typha loses more organic matter in sites subject to seasonal wet/dry hydrological cycles compared to permanently inundated sites.

Bulrush is a particularly aggressive coloniser of disturbed wetlands on the Swan Coastal Plain and it is particularly hard to eradicate because they form dense mats of rhizomes and roots. Seedlings can flower after 6 months.

High: major threat to the conservation values of the wetter areas of the South-West Province.

Eradication is difficult due to prolific seed production and extensive rhizomatous roots. Cutting shoots 15 cm below the water surface two to three times in a season when actively growing, but before seeds are formed, greatly reduces stands. Repeat treatment annually to ensure against reinfestation. To avoid loss of water quality by anaerobic decomposition of dead plant material in water, consider physical removal of dead biomass or burning. Management of Typha may impact on waterbird roosting sites and habitat.

Apply Roundup Biactive® (360 g/L) at 13 ml/L when actively growing through wiping, backpack/handheld spray or high volume spray. The optimum time is between male flowers opening and 6 weeks after female flowers open. This period is usually the end of December through to February. Complete coverage of foliage is necessary. Avoid producing run-off or spray drift. Plants with one third of the stem below water may not absorb enough herbicide to be killed by spraying – either wait till water levels are lower or plants have matured. Repeat treatment annually to ensure against reinfestation. To avoid loss of water quality by anaerobic decomposition of dead plant material in water, consider physical removal of dead biomass or burning 6 weeks after spraying. Read the manufacturers’ labels and material safety data sheets before using herbicides. Management of Typha may impact on waterbird roosting sites and habitat.