Save the Black Cockatoos

Why urgent action is needed

However, all 3 species have fallen drastically in number and could be extinct within a few decades without strong action to protect their remaining habitat. Accelerated clearing for urban development, mining and logging is depleting both their food supply and the old trees with large hollows that they need for breeding.

So, we all have a responsibility and an opportunity to safeguard these iconic birds – found nowhere else in the world – by protecting the forests, woodlands, and other habitat they need to survive.

And yet, our State Government is failing to protect important black cockatoo habitat and bird numbers continue to dwindle.

Actions you can take

Please write a letter to Premier Mark McGowan to delay the clearing of the Gnangara Pine Plantation which has become a lifeline for the Ngolyenoks (Carnaby’s Black-Cockatoos).

The enormous loss of natural vegetation due to historical clearing has forced many black cockatoos to rely on gardens and plantations for food. The Ngolyenoks in the Perth-Peel region are now reliant on a single pine plantation for half their food. But the Gnangara plantation is currently being chopped down and has been reduced from 23,000 hectares to under 6,000 hectares in 20 years. Irresponsibly, there has been virtually no revegetation to replace the lost food source.

The Ngolyenok population in Perth has already declined by 35% over the last 10 years. Scientists say that removing the pines without replanting will cut their population in half by 2050. So this is urgent!

We can live without the timber for now; the black cockatoos cannot.

Help spread the word by taking a picture of yourself with the WANTED ALIVE poster and sharing it with your family and friends. We need thousands of letters to get the Premier to act.

Help us create a giant black cockatoo with candles at Parliament House as we hand over a petition to Hon Stephen Pratt MLC to Save the Black Cockatoos. Tuesday 9th August 5:30 – 7:00pm

Stay up to date on events and actions.

Black-Cockatoo Conservation and Recovery: Guidelines for councils and land managers (by Birdlife Australia)

About the Save the Black Cockatoo Coalition 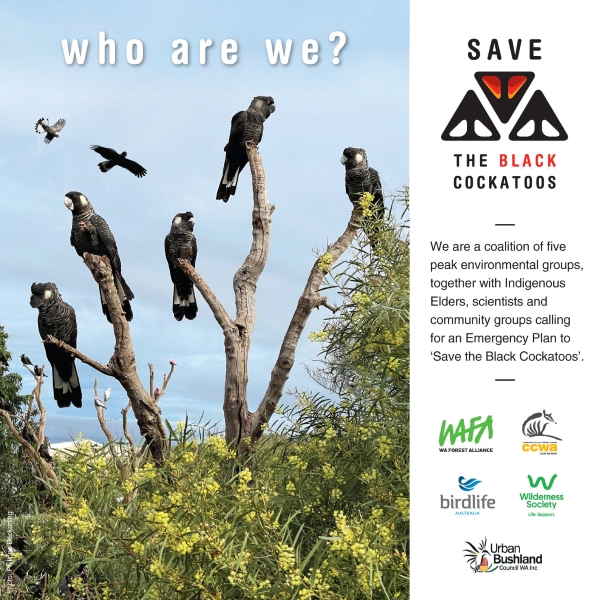 The Urban Bushland Council has joined a coalition of Traditional Owners, peak conservation groups, and leading WA scientists who are calling on the WA State Government to initiate an emergency plan to save WA ’s threatened and endangered black cockatoos.

We want the State Government to step in and initiate an immediate moratorium on the clearing of habitat until such time as their natural food habitat can be restored. This includes the Jarrah Forests for mining bauxite and other minerals plus the Gnangara pines which the Ngolyenok/Carnaby’s Cockatoo depend on.

An emergency plan must include increasing habitat restoration, improving fire management practices, and intervening to stop the shooting of Ngolak/Baudin’s Cockatoos by orchardists.