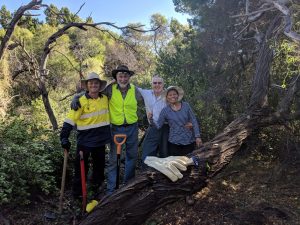 Friends of Point Peron (FPP) was founded by James Mumme in 2006 in response to letters in local Rockingham papers saying that the Cape was full of rubbish and weeds and needed a marina.  The initial idea was for people to adopt patches of bush and look after them in their own time.

For six years 14 families pulled out Geraldton carnation weed from their patches, removed rubbish and planted over 6,000 seedlings with good support from Parks and Wildlife who funded planting and a pump and trailer.

An elderly couple could often be found carrying two litre bottles of water to their seedlings. They even made a sign – Bert and Belle’s Patch.

Once a fortnight we’d meet as a group to work on one family’s patch.  Today only two adoptive families continue tidying up their plots once a year – natural regrowth has complemented replantings and flourished in the absence of competing weeds.

Then work stopped as key members became involved in attempting to save the Park from the proposed Mangles Bay Marina.  We researched, lobbied and wrote submissions to various levels of government losing every battle.  Ultimately in mid 2016 60 of us appeared in person before the WA Planning Commission after nearly 500 sent in written submissions.

After those hearings hopes began to revive because planning issues looked like they might sink the project which in the end they did, though not without huge work into the environmental issues.  FPP began tackling carnation weed again. 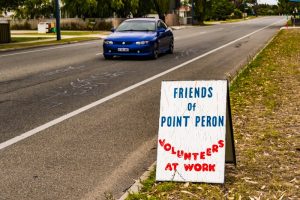 This year with great support from Parks and Wildlife we have also been tackling woody weeds – mainly Brazilian peppers and buckthorns – which have gone feral during the time the Mangles Bay Marina was hanging over the Park.  Many of the threats to the TECs at Lake Richmond are understood to be originating across the road in the Cape Peron Reserve.  Since 2017 over 400 volunteers have taken part in clean up rubbish, removing weeds and planting 12,000 seedlings.  Parks and Wildlife of DBCA manages Cape Peron and has supported FPP.  The City of Rockingham have also come to the party in offering to remove the trees.

Elements in the local community are still eyeing the Cape for development!   Bush Forever sites are not yet well enough valued or protected to ensure they are beyond bulldozing.  Dept of Planning has been considering proposals to upgrade the status of the Reserve to Class A, something that FPP and the City of Rockingham Council want.

Friends of Pt Peron is demonstrating to the community and to decision-makers that people do care about the Park and are willing to get their hands dirty and their shirts sweaty.   We are also supporting Parks and Wildlife’s work and helping to prepare for the eventual Coastal Park of the South (or whatever it will be called).

Most weeks we work on Sundays 8am on and Thursdays 3pm on.  The deal is you come when (and only if) you want, stay as long as you want and do as much or as little as you’d like.  We do want to see you again.

Our annual program is