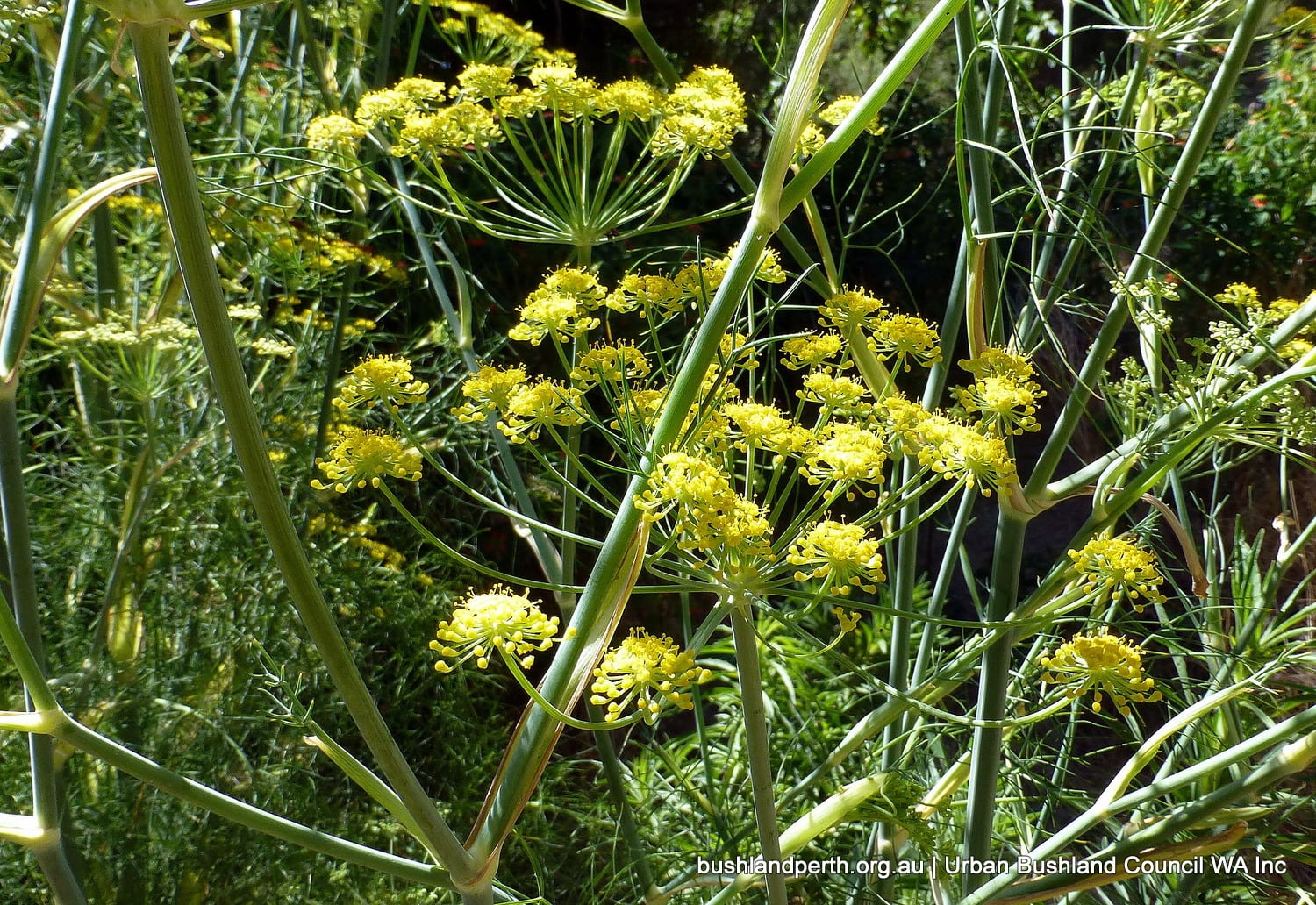 Fennel was originally a native of Europe and Asia and introduced for use as a spice, in medicinal compounds and as an ornamental shrub. It’s leaves smell of aniseed. It is difficult to remove completely as the plant has a deep taproot and lots of lateral roots and resprouts after fire. The plant is a prolific seed producer and the seed is highly viable.

An erect, robust, perennial growing to 2.5 m in height, Fennel produces yellow flowers most of the year. It is a hardy plant, tolerant of frost, drought, water logging and semi-aridity. Mature plants have a large deep taproot with many lateral roots. During a growing season plants usually include a mixture of living and dead hollow stems (canes). Initially growth is slow during winter and spring, then becomes rapid in early summer. Flowering stems die during late autumn and early winter, although some remain alive and begin to produce new leaves with the onset of rain. Reproduction is via root fragments and seed. Dispersal happens by many means including: soil, machinery, water, birds, rodents, clothing, garden waste and soil movement.

Plants generally do not flower until 18 months to 2 years old. Flowers are insect-pollinated and produce a prolific amount of seed with high seed viability. A persistent seedbank is rapidly established and one plant can produce thousands of seed in the first year, seed output can then increase greatly in the second year.

In wetter areas Fennel can become a major problem as it is persistent and difficult to eradicate. It forms dense uniform stands where it out competes other plant species for light, nutrients and water. Fennel can prevent the re-establishment of native plants and alter the composition and structure of communities. It is possibly allelopathic and can alter fire regimes by building an intense fast moving fire, although it does not burn well in spring.

Manual methods are most effective for small and/or isolated infestations. If manually removing be extremely cautious – contact with the sap or oil can cause photo-sensitivity and/or dermatitis in cattle. Also, ingestion of oil can be toxic to humans.

Spot spray with 1.5% Glyphosate or metsulfuron methyl 0.7 g/10 L (20 g/ha) + Pulse®. Apply in spring just before flowering. Follow up control of seedlings. Combination of burning followed by spraying may be effective. Cutting or slashing temporarily reduces heights, but plants readily resprout. Repeated cutting may have more impact by helping to exhaust the taproot over time, however, intervals between cuts must be short. Cutting prior to spraying does not generally increase the effectiveness of herbicides. Read the manufacturers’ labels and material safety data sheets before using herbicides. Optimal spraying months are August to December.