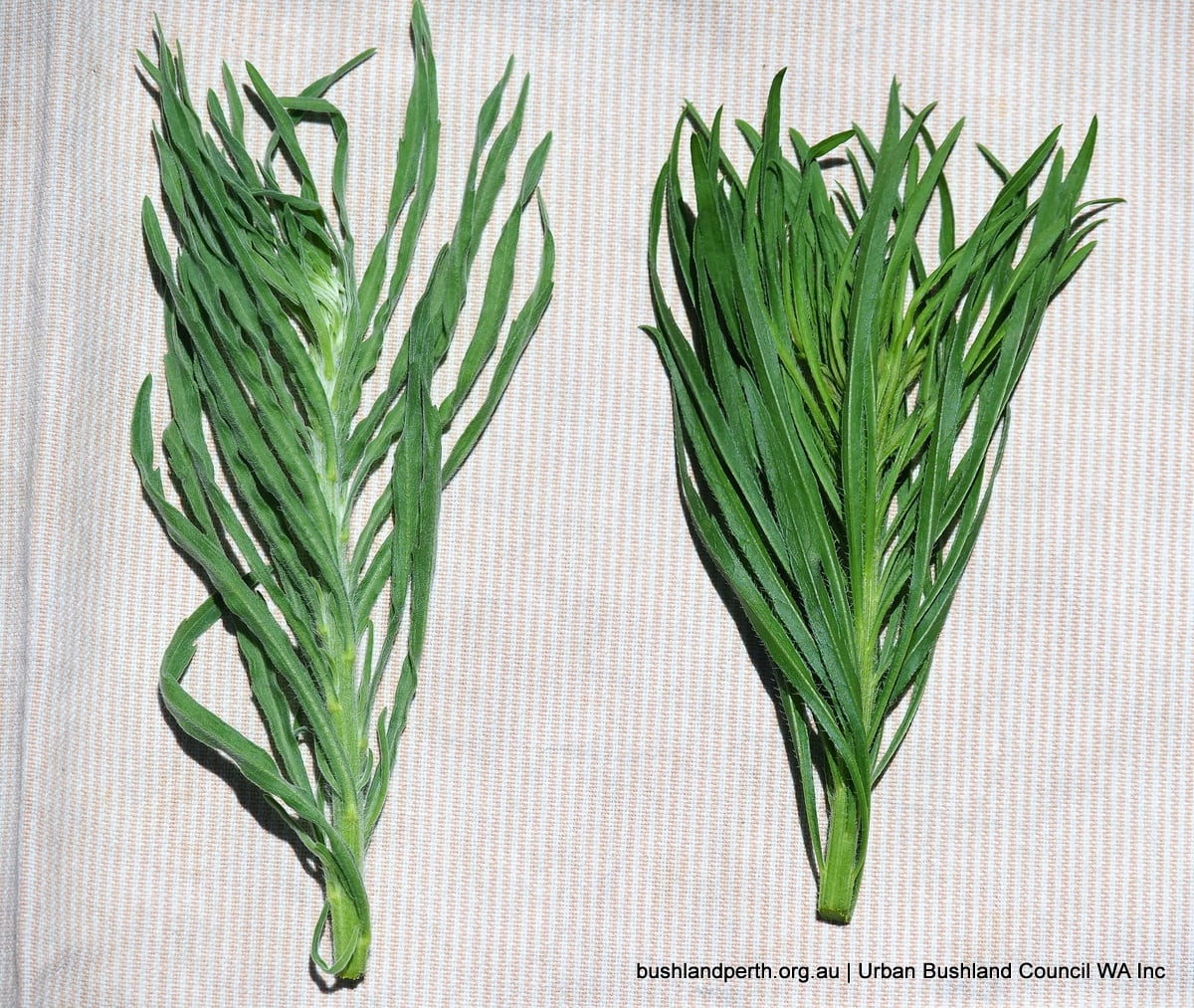 This common grey, hairy annual can grow to about a metre high and produces copious seeds in summer which are dispersed by the wind. Originally a native of South America it was probably introduced with horticultural plants. There are a number of Fleabane species in West Australia – Conyza borariensis is spread more widely than some others like Conyza sumatrensis. It can also be distinguished by its stem which branches below each pyramid of inflorescences resulting in a candelabra shape.

Flaxleaf Fleabane is an erect annual herb growing to about a metre high. It produces masses of fluffy white flowers throughout the year. It’s seedbank persists for up to 3 years and in response to fire is likely to respout. Light stimulates germination. Soil type and burial depth has significant effects on seed persistence and emergence. It predominantly emerges from the soil surface or burial depths of 0.5 cm and hHas small lightweight seed that allows it to readily be dispersed long distances. Some biotypes have herbicide-resistance in parts of the world, however no glyphosate-resistant Conyza populations are recorded in the southeast of Western Australia.

In bushland it usually does not compete well under high plant density or cover and requires disturbance to establish and persist.

Found across various area in West Australia, often in bushland near cultivated land, in waste places and on roadsides.

Plants can be removed by hand at any time of the year but manual removal is best in winter and early spring. It is generally more difficult to control than other species of Fleabane. Hand remove small and/or isolated infestations prior to seed set. Resprouts from basal buds after top removal.

Timing of application is key to the efficacy of any herbicide treatment. Most susceptible to Glyphosate at the rosette stage and least susceptible at flowering. Apply Glyphosate when plants are small (at rosette stage <10cm across) 25 ml/ 10L after stem elongation and before flowering and actively growing. Otherwise 50% Glyphosate can be used to wipe the stems of plants. At later stages, it is difficult to control with any single herbicide treatment. Read the manufacturers’ labels and material safety data sheets before using herbicides. Spraying is optimal in June, July, August and September.