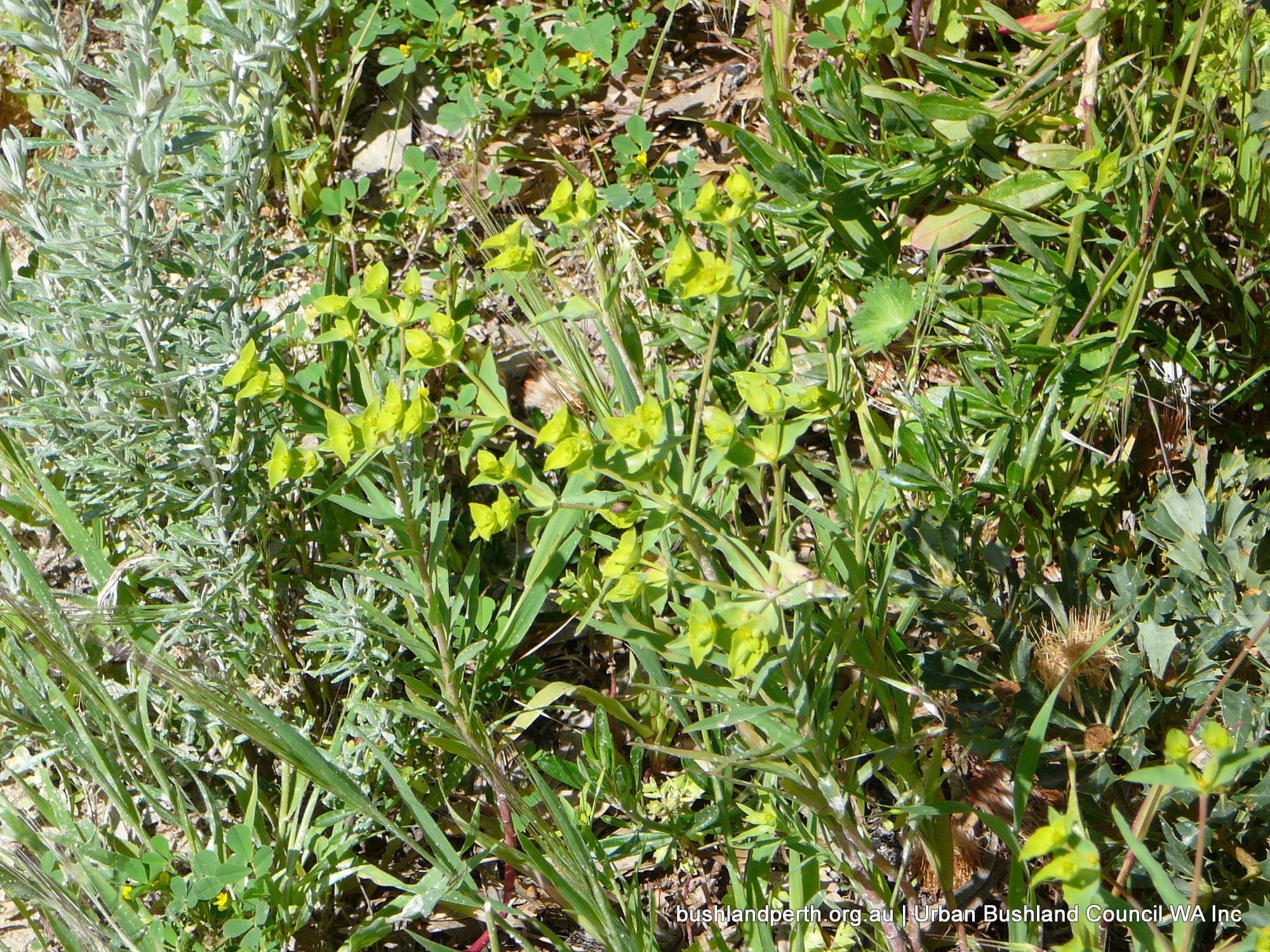 This is a common and serious perennial weed of the Swan Coastal Plain and South-West Province. It is most often seen on road verges and disturbed coastal areas and swamps. A native of the Mediterranean coast, the reasons for its introduction are uncertain, however many species of Euphorbia were used as ornamental plants. The plants have very toxic milky sap when cut.

The weed is an erect or ascending short-lived perennial growing to about 0.5 m high with bright green-yellow flowers from August to December. Reproduction is by seed that is then dispersed by fruit opening explosively, birds, ants, movement of limestone soils and by machinery. This weed has rapid growth and prolific seed production in the first season. Germination may occur at any time of the year if there is adequate rainfall. If there is insufficient rainfall, depletion of the seed bank may be relatively slow. Plants from early cohorts produce greater numbers of seeds per plant than late cohorts. The seedbank persists for 3 to 5 years and the sap is poisonous and an irritant. Plants are generally killed by fire, however some resprout. Fire may also cause mass germination of soil-stored seed.

If left will spread over bushland and impact on plant communities. Once established it is able to invade relatively undisturbed vegetation. Invasion into natural areas is greatly enhanced by disturbance such as grazing, fire and soil movement. Its alleolopathic properties, can reduce germination of other plant species, form dense thickets and out compete native species for space, light and nutrients. The toxic sap deters native herbivores.

High: major threat to the conservation values of Banksia and Tuart woodlands. Can cause major structural changes to the plant communities that it invades.

Ensure adequate personal protective clothing is worn to avoid contact with toxic sap. Hand removal can also stimulate germination of the soil seedbank. Control of the late emergents before seed formation will prevent fresh seeds being added to the existing seedbank. Slashing in November after seed production may result in no vegetative regeneration, due to lack of food reserves in the underground roots and stem – the remaining underground plant parts cannot withstand hot dry summer conditions. Undertake control after any fire event. Optimum manual removal should be done between June to November but can be done in any month if new seedlings appear.

Logran® at 12.5 g/100L + the penetrant Pulse ® is very effective on adults and juveniles with little off-target damage in coastal heathlands. Ensure adequate personal protective clothing is worn to avoid contact with sap. Since seed production is highest from plants which emerge early, it is important to control early cohorts, if not treated when small these become increasingly tolerant to herbicides. Control of the late emergents before seed formation will prevent fresh seeds being added to the existing seed bank. Undertake herbicide treatment after any fire event. Spraying can be done occasionally in any month. Read the manufacturers’ labels and material safety data sheets before using herbicides. Optimal months for spraying are June, July and August.