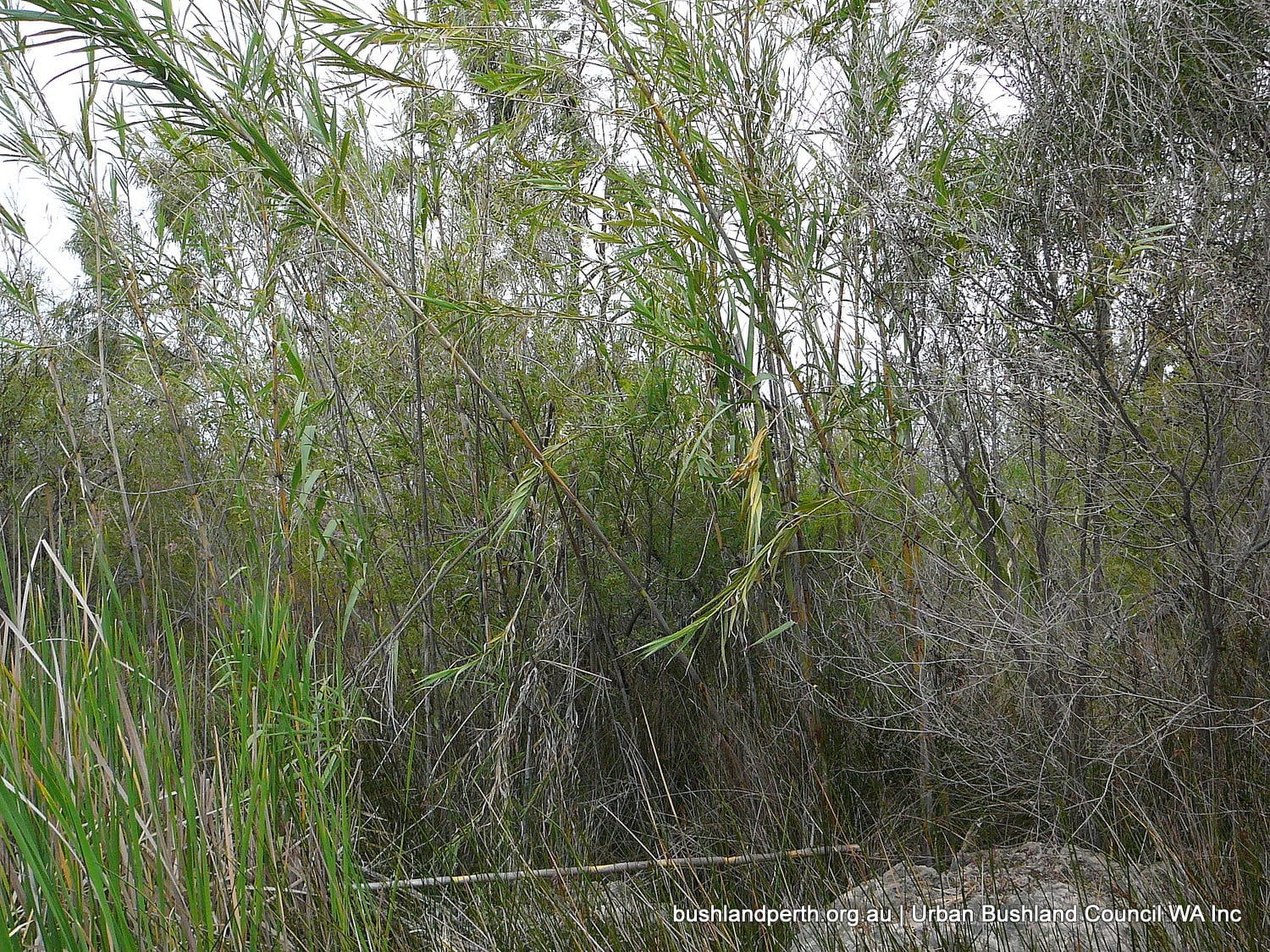 This bamboo like most perennial grasses spreads rapidly by rhizomes and can form thick thickets. It produces tall woody stems to six metres tall and is topped with fluffy panicles. Originally it was introduced from southern Europe and Asia for a variety of reasons and has been used as a building material, in ornamental gardens, woodwind instruments and as a means of controlling erosion.

The Giant Reed is a perennial, rhizomatous grass with tall woody stems to six metres tall topped with fluffy panicles in summer. This weed is highly drought tolerant once established. It tolerates a wide range of soil types but responds dramatically to nutrient enrichment. Rhizomes tolerate salt water and can dessicate for several months and then form roots in moist substrate.It reproduces by rhizomes and stem nodes and rarely sets fertile seed. The rate and success of regeneration increases toward summer. Research has shown populations in the United States have limited genetic diversity.

This reed can form thick thickets and can cause major structural changes to the plant communities that it invades. An aggressive competitor with rapid growth rates, it forms thick homogenous stands that can displace native riparian vegetation. Provides poor habitat for terrestrial insects and wildlife. Traps sediments and narrows flood channels leading to erosion and flooding. Highly adapted to extreme fire events and can increase fire intensity. It grows aggressively in wetlands, wastelands and in older settlements.

Found on roadsides, creeklines, wetlands and wasteland from Geraldton to Albany usually in white sand or peaty sandy clay.

High: can cause major structural changes to the plant communities that it invades.

Growth can be suppressed by repeated mowing or tillage and removal of material from site. However the key to eradicating infestations is killing the root and rhizome mass. Small infestations can be physically controlled ensuring all rhizomes are removed. Stem fragments will regenerate only when the axillary bud is intact. Careful timing of mechanical control and treatment of cut material can minimise or inhibit sprouting. Potential biocontrol agents (including a scale insect, wasp, Arundo fly and leafsheath miner) are being investigated for various Arundo donax ecotypes.

In larger infestations, use foliar or cut-stump applications of aquatic approved herbicide (Round-up Biactive®). Chemical control is most effective in late summer and early autumn. A single 3% to 5% Glyphosate foliar application late in the season has been effective at killing stems and stopping production of new stems the following spring. As seed spread tends to occur downstream, the best control approach is to start upstream and work downwards. Herbicide treatment is best done in February and March.