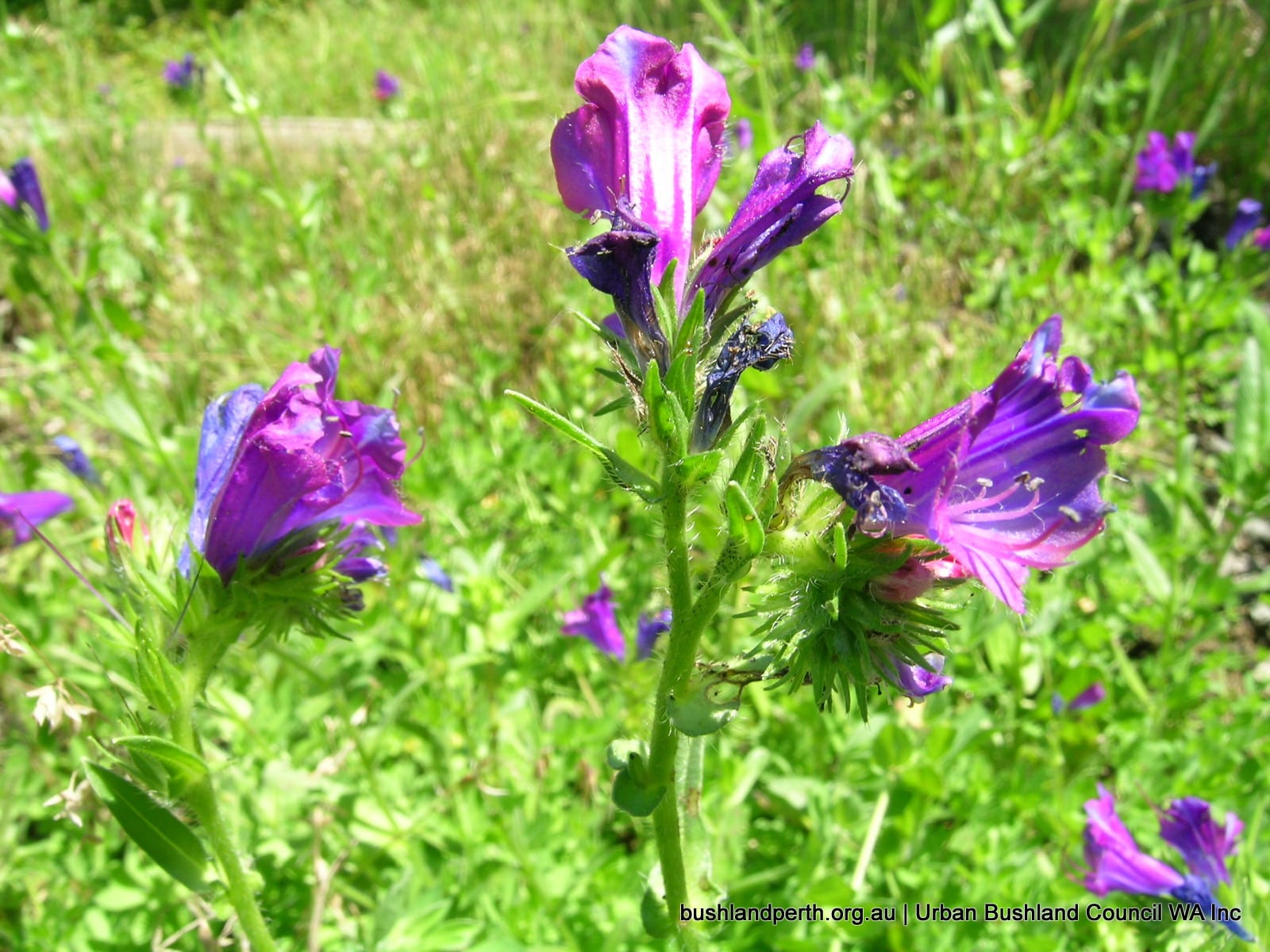 This Declared Pest is easily identified by its deep purple flowers in spring which may cover broad fields in agricultural land.  It originated from Macronesia and temperate Asia and was introduced as an ornamental plant, for agriculture as a plant that would attract bees and as a contaminant in seed supplies. As a Pest Plant under the Agriculture and Related Resources Protection Act 1976 there are documented control strategies in place.

Paterson’s Curse is a large, coarse, bristly annual or biennial. It grows to about 0.6 m high and bears numerous purple flowers on a branched shoot system mainly in late winter and spring. From September to January masses of blue/blue-purple/pink/white flowers carpet agricultural fields and bushland. Reproduction is by seed and it is dispersed by: water; machinery; animals (ingestion and adhesion); and contaminated hay and grain. The plant produces large amounts of seed that can germinate at any time throughout the year, however most germination occurs after substantial rains in autumn and winter. Seed may remain dormant in the soil for up to 6 years but most will germinate within 2 years. The plant is poisonous to mammals. Smoke can stimulate seedling emergence.

This weed causes acute disruption of the ecological processes, and dominates and/or significantly alters vegetation structure, composition and function of ecosystems. Often it forms dense monocultures. It is now spreading into the Mulga belt where it is displacing native annuals including everlasting daisies.

Paterson’s Curse is a widespread weed found mostly in areas dominated by winter rainfall. It has adapted to a wide range of soils and is often found in agricultural lands across the Eremaean Province and the South-West Province. It is also found on roadsides, in vacant lands and disturbed grounds. It is common in the Avon and Swan Valley regions.

Grubbing and cutting are suitable for young plants as long as 20 to 40 mm of taproot is removed. Slashing or mowing can cause out of season flowering and seed production. A biological control program started in the late 1980s and 6 agents have since been released. The first, a leaf-mining moth is widely distributed but has had limited impact. Of the remaining six agents, four are currently being redistributed across southern Australia. Optimal time for manual removal of this weed is between May and August. It can also be occasionally removed in other months of the year.

As a Declared Pest under the Agriculture and Related Resources Protection Act 1976 there are documented control strategies in place.

Plants are best treated when young. Spot spray in late autumn/winter when most seed has germinated for the year with 0.5 g/10 L chlorsulfuron + wetting agent, this will also help prevent further germination. Glyphosate at 75 ml -100 ml/15 L or metsulfuron methyl 5 g/ 100 L applied at early flowering will control existing plants. Read the manufacturers’ labels and material safety data sheets before using herbicides. For optimal treatment, spraying should be done between May and August. It can also be done occasionally in September.

Herbicide resistance to Group B/2 herbicides has been recorded in West Australia.

As a Declared Pest under the Agriculture and Related Resources Protection Act 1976 there are documented control strategies in place.