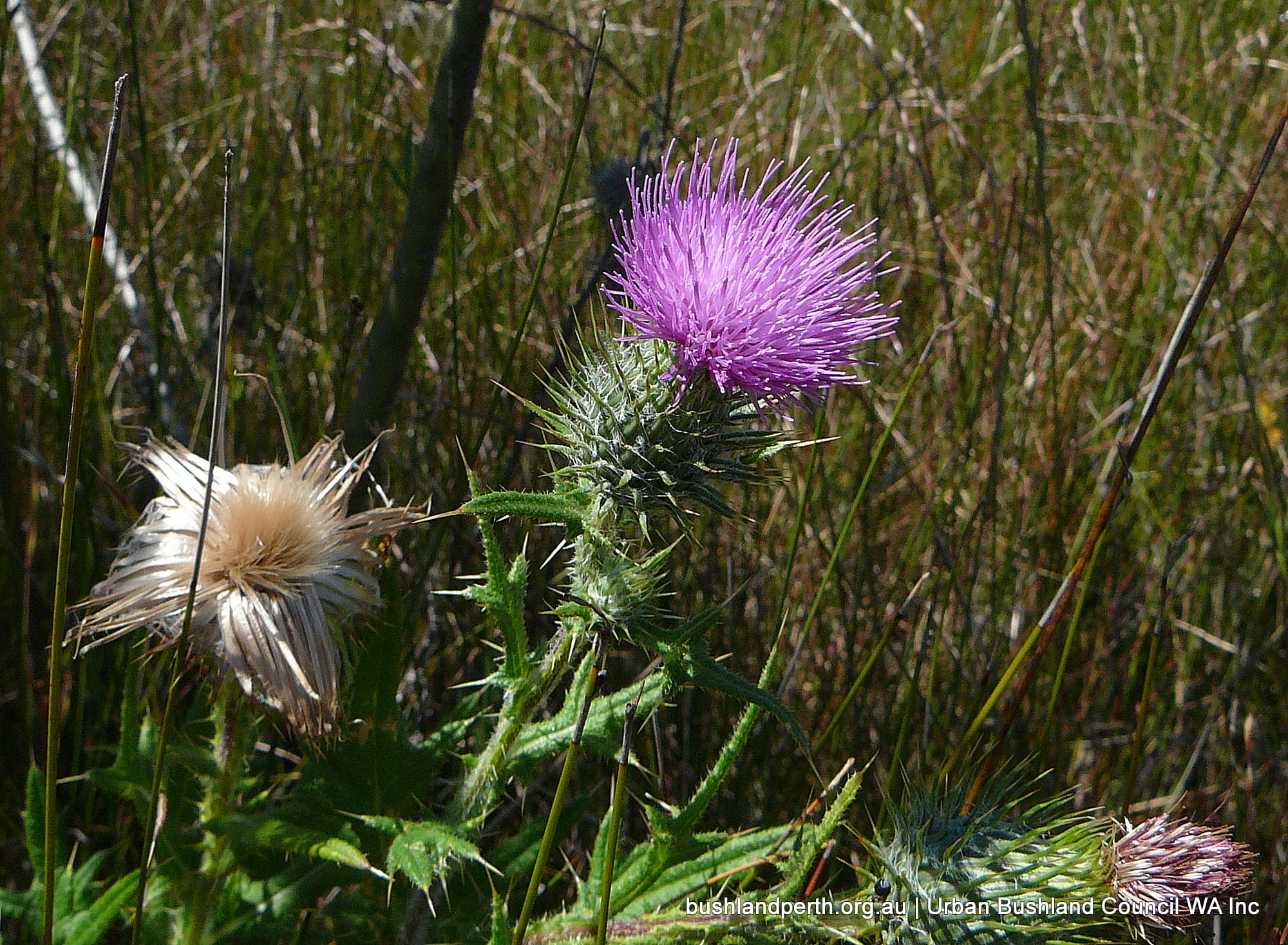 This thistle grows to 1.5 m and has spiny stems, leaves and flowers and is often found in areas recently burnt. It is intolerant of shade and requires moist soil to establish.  The plant was originally from Europe, north Africa and western Asia and may have been used as a food.

Cirsium vulgare is a biennial thistle growing to 1.5 m high. It has spiny leaves that continue down into the spiny, winged the stems. The spiny purple and red thistle flowers may be produced during any month and are hermaphrodite (have both male and female parts) and are either self-pollinated or cross-pollinated by bees, flies, moths, butterflies and beetles. Peak flowering normally occurs in late spring to early summer. The wind can disperse seed over a large area, however the pappus can readily detach from seed at maturity, leading the majority of seeds to fall within a short distance of the parent plant. Seedlings and young rosettes are susceptible to drought over summer. After germination a major root system develops rapidly, whilst a rosette is more slowly formed above ground. Seed in the top 2cm of soil mostly disappears in one year but may last up to four years. Seed buried at 20cm may last up to 50 years. After fire it resprouts. Fire also creates conditions suitable for mass germination of soil-stored seed.

An aggressive weed in disturbed sites, particularly those that have been recently burnt. The rapid disappearance of seed from the soil surface means that management practices that result in seed burial should be avoided.

Common in disturbed areas of the Eremaean and South-West Provinces south of Perth. Cirsium vulgare prefers the sub humid to cool-temperate regions usually on more fertile heavier soils and can be seen in pastures & roadsides in higher rainfall areas.

Mowing/slashing at bud or early bloom stage will cause plants to resprout. However, close mowing or cutting twice per season will usually prevent seed production.

Glyphosate at 0.5% provides effective control of seedling and adult plants, alternatively spot spray Lontrel® 6 ml/10 L (300 ml/ha) + wetting agent, from rosette stage to early flowering. Blanket wipers or wick applicators using 50% Glyphosate can provide some selective control. Eliminating seed production is the most effective mechanical control technique. Read the manufacturers’ labels and material safety data sheets before using herbicides. Optimal months for herbicide spraying are between May and September but can also be occasionally done in April and October.