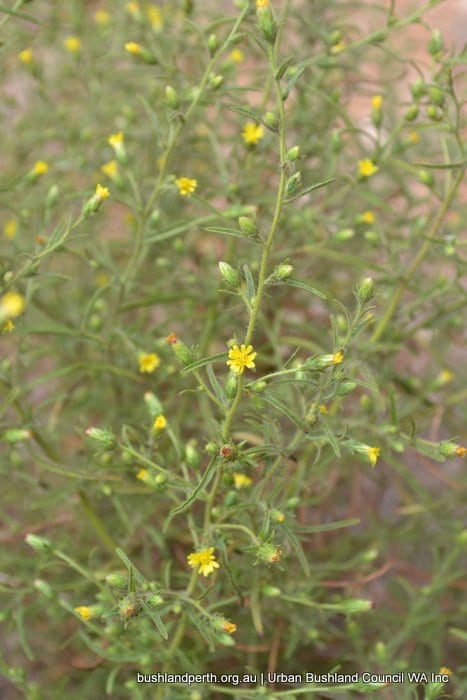 This weed originated in northern Africa, temperate and tropical Asia  and Europe. The plant produces yellow flowers in late summer and autumn. If crushed it produces a strong, unpleasant smell and can cause dermatitis and skin irritation, is poisonous to livestock and can also taint milk. Stinkwort is a Declared Noxious Weed in Victoria.

Stinkwort is an erect, bushy, viscid, aromatic annual herb growing to 0.5 m high. The plant produces yellow flowers in late summer and autumn. It is strongly aromatic and produces prolific amounts of seed. The seed is dispersed by wind, water, agricultural activity, machinery, vehicles and animals (especially on wool and fur). The seed secretes a sticky exudate that causes seed to cling to clothing, animal fur and machinery. Seeds persist in soil for up to 3 years.

It has adapted to temperate Mediterranean climates with winter-dominant rainfall so is widely distributed across the Eremaean and South-West Province. It can be found in a variety of soils often on waste grounds, along rivers and roadsides and in open vacant ground.

Any treatment should be applied twice, early and then late summer. Apply Glyphosate at 1% when plants are small, or up to flowering. Clean equipment, clothing and shoes, etc. to prevent spread of seed. Read the manufacturers’ labels and material safety data sheets before using herbicides. Optimum months for spraying are November and December and occasionally in January.