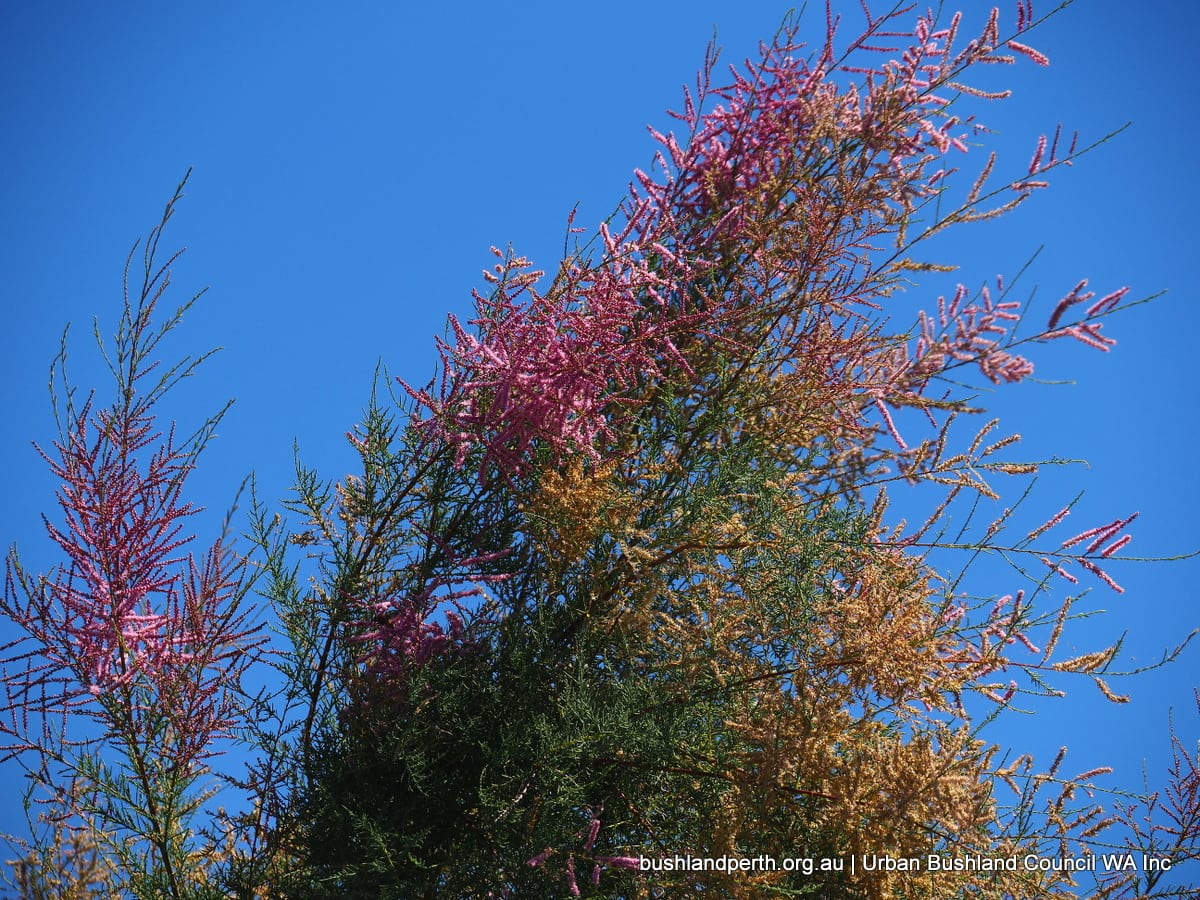 The Tamarisk originated in south eastern Europe, including Turkey, Crete, Greece and the Balkan States and was originally grown as a shade tree in drier areas. The distinguishing feature of T. parviflora is the four-petal flower. T. aphylla has five-petal flowers.

Tamarisks are trees to 12 m high with a stout trunk and greyish-green leaves and spikes of tiny pink and white flowers and flowering is from February to May. Reproduction is by seed that is highly viable, stem and root fragments. Dispersal is by water, wind, machinery and garden refuse. The seed also spreads when broken branches take root. The time to first flowering is 3 years and the seedbank persists for less than one year. Plants generally resprout following fire, however, the response can vary greatly depending on timing (temperature and moisture conditions), phenological stage of plants and fire severity. Leaves are not highly flammable due to high moisture content, even though they contain volatile oils. The tree is moderately drought tolerant, though less drought tolerant than other Tamarix species.

Tamerisk can cause acute disruption of ecological processes and may dominate and/or significantly alters vegetation structure, composition and function of ecosystems. It is not listed as a Weed Of National Significance (WONS) species, however it is naturalised in Western Australia and has the potential to become a serious environmental weed. The long tap root allows it to tap the deeper water table and can interfere with aquatic systems. Tamarisk is potentially a serious weed of the arid zone watercourses, causing alteration of flow and salinisation of water. Extensive eradication programs have been undertaken in some areas although total eradication is difficult.

Found along river banks across scattered areas of the State.

In pasture or degraded areas, manually removal all plant parts and follow up to control any regrowth. Manual weeding can be done any time during the year.

Inject 100% Glyphosate into root crown. In sensitive environments, cut stem to ground level, then immediately paint with Access® 17ml/L in diesel (using Glyphosate with cut stump is ineffective). Where there is limited risk of off-target damage or impacts on waterways try foliar spray with triclopyr 600g/L at 1.7 to 10ml/L in water. Read the manufacturers’ labels and material safety data sheets before using herbicides. Treatment can be done any time during the year.