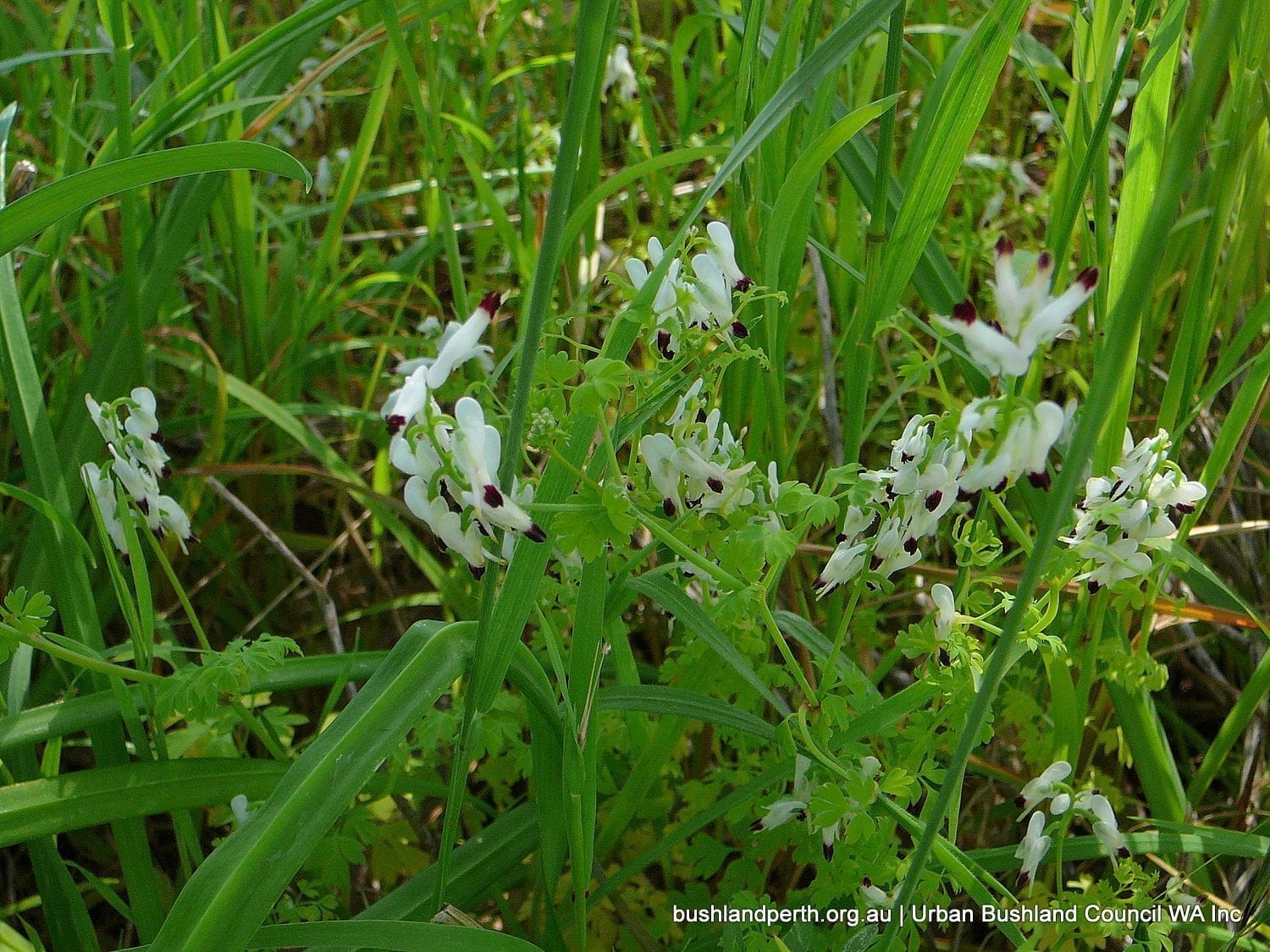 Whiteflower Fumitory is one of the early annuals appearing soon after the first autumn rains. The first flowers appear within weeks of the sprouting and the plants are easily identified by their bright green leaves and white flowers. It is the only Fumaria with white flowers in Western Australia. It is a native of northern Africa, temperate Asia, Europe, Macronesia, northern Africa, temperate and western Asia and Europe.

It is a low spreading creeper that sprawls and entwines over native vegetation. The flowers are white and the tips red/brown. Reproduction is by seed and dispersed by contaminated seed and soil movement. It is suspected of being toxic to stock. This weed may hybridise with Fumaria muralis.

Fumaria grows rapidly and very soon flowers are produced and seed starts to set. This rampant growth rapidly smothers native flora and produces a massive amount of seed which may persist in the ground for 20 years. In some bushlands it creates a blanket of green and white over and under native trees and shrubs. It is not uncommon to find stems a metre up in the shrubs. In bushland it is difficult to control due to a strongly persistent soil seed bank.

Common in bushland on the Swan Coastal Plain and the South-West Province. It is commonly associated with settlements from Mullewa to Albany and east to Lake Grace. It colonises degraded sites, wastelands and road verges.

High: major threat to the conservation values of Banksia and Tuart woodlands. Can cause major structural changes to the plant communities that it invades.

Can be easily hand removed when seedling appear but this needs to be repeated at least every couple of weeks during the growing season. Any soil disturbance when hand weeding will lead to continual germination from the soil seedbank so extra care is needed to minimise soil disturbance. Potential biological control agents were assessed after one species Fumaria densiflora developed populations with herbicide resistance.

Spray metsulfuron methyl at 0.1 g/15 L (2.5 g/ha) + wetting agent or Glyphosate 0.5%. Read the manufacturers’ labels and material safety data sheets before using herbicides. Optimal months to spray are July, August and September. Herbicide control can be unpredictable and variable, with tolerance and resistance varying among species of Fumaria.