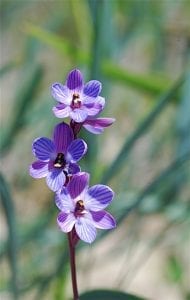 Landsdale Park is directly to the east of Landsdale Farm School.It is a Bush Forever site; #199.

It is bounded by Landsdale Road to the north, Hepburn Avenue to the south, the farm school to the west and development to the east so its only direct linkage to other bushland areas is through the air. The bushland is part of Greenways 10.

The earlier future of the bushland was that it would be turned into playing fields but due to the efforts of the Landsdale Farm School principal at the time, Tim Saggers, and the Friends of Landsdale Bushland, and later with the cooperation and assistance of the City of Wanneroo, the bushland was set aside for a Conservation Park.

The banksia and jarrah bushland has a very rich understory. The condition of the bushland is noted as > 90% Excellent and < 10% as very good.

A guided walk is held on the first Saturday of each month from 8am to 9am. Meet the guide at the gateway on Landsdale Road at the north-west end of Landsdale Reserve.

Until recently Landsdale Park had been completely fenced off. However, a new gate has been erected so the public can access the bushland from Landsdale Road at any time.