The Save Perth Hills Rally is coming up on the 7th March! Make sure it is in your calendar. You can find more on their Facebook page

Save Perth Hills have a rally planned for 7th March at Mundaring’s Sculpture Park and they are asking for your support. Politicians from all sides support this campaign: Labor, Liberal, the Greens and Independents. 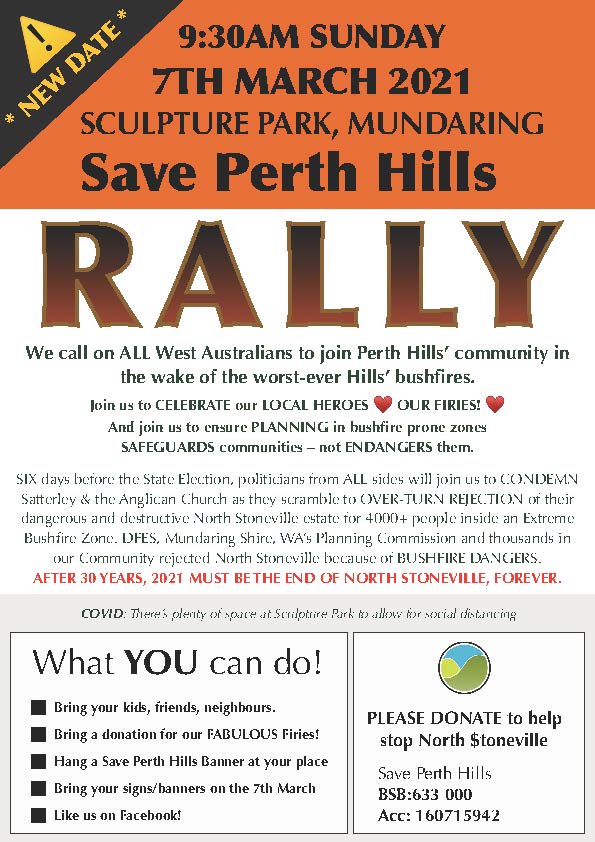 Save Perth Hills a community group has been fighting since the 1990’s to stop a development known as North Stoneville which is owned by the Anglican Church and being developed by the Satterley Group. More than 200 hectares of high to excellent conservation forest and vegetation will be bulldozed where our native wildlife live and depend upon for food and shelter. It is with 5 -7 kms of the area that was affected by the Wooroloo fires and if the wind had changed North Stoneville would have experienced the fire which would then have continued into John Forrest National Park.

The development for North Stoneville originally conceived in the 1990’s needs to be stopped permanently. We have learnt a lot about our bushland in the last 30 years. Nobody had even heard of climate change when the Anglican Church asked Satterley to look at this development. Strange how the Anglican Church have a green policy they tell everybody else to do but ignore it themselves.

This campaign shows that it is not about individual politicians. The government as a whole needs to change its processes. Getting your local member to support the cause is only one battle. We need the whole planning system to change.  We need policies directed towards the retention and restoration of habitat in local remnant bushland. These policies also need to recognise the immediacy of negative climate change influences.

Conserving our natural heritage requires perseverance and resilience. It involves increasing community awareness of environmental issues as well as advocacy and activism.  It requires people banding together in groups: forming friends’ groups or joining peak bodies such as the Urban Bushland Council.

Join the rally at Mundaring on Sunday!