Threat to centre of biodiversity in Perth

The Swan Coastal Plain is known as a biodiversity hotspot, but some believe an area in Kenwick called the Greater Brixton Street Wetlands (GBSW) is the hottest spot of all. Unfortunately, it is under imminent threat from development of an industrial area. 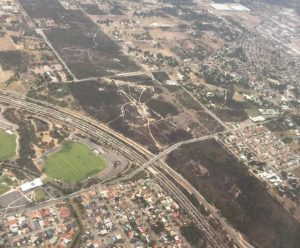 GBSW is less than 130ha but home to at least 558 native plant species, including more carnivorous plants than all of Europe. This area includes the Brixton Street Wetlands and the Alison Baird Reserve, well known to students of UWA. It also includes adjoining bush reserves on the flood plain of the Yule Brook. Alison Baird Reserve has been an important research site for many years.  Research is revealing that rare plants may depend not only on groundwater, but movement of minerals through groundwater.

Together, this “Greater Brixton Street Wetlands” contains six threatened flora species, including the critically endangered Grevillea thelemanniana, and three threatened fauna species, including the Forest Red Tailed Black Cockatoo, under the Commonwealth Environment Protection and Biodiversity Conservation Act 1999. There are 27 Priority Flora Species listed by the WA Department of Biodiversity, Conservation and Attractions.  There are also four threatened ecological communities of national significance, including the critically endangered Claypans of the Swan Coastal Plain. Both Bush Forever and Conservation Category Wetlands are found within the area.

However, around 60% of this area of significant natural heritage is surrounded by a planned industrial estate, the Maddington-Kenwick Strategic Employment Area (MKSEA). Part of the MKSEA are currently under construction.

The problem is that the GBSW and the MKSEA are part of the same landscape, which has a complex hydrology feeding the Yule Brook.  It is believed that much of the water movement through the GBSW is via groundwater flows that are not fully understood.

Many community members and scientists are concerned about the potential for development of the MKSEA to irrevocably alter that critical hydrology, adversely affecting the biodiversity of the GBSW. The threats include decreased water quality, including salinity; increased urban heat island effect; proliferation and spread of weeds and pathogens; increased risk of wild fire, the direct loss and degradation of trees and other native vegetation and fragmentation of already threatened habitats.

The Beeliar Group: Professors for Environmental Responsibility (TBG) have put for forward a vision for a Yule Brook Regional Park connecting Lesmurdie Falls National Park to the Canning River and which will preserve GBSW.  The plan is not opposed to development of the MKSEA but calls for water sensitive urban design principles, buffer zones and sustainable road design to be applied across the site.  Alternative water management would allow local infiltration to recharge groundwater, rather than piping runoff to distant locations and “wasting” water in a drying climate. Numerous hydrology experts believe this alternative is the best option to preserve the GBSW’s important environmental values.  Click here for TBG’s vision statement.

One of the developers of the MKSEA, Linc Pty Ltd has referred their project to the EPBC as it will affect a known cockatoo roost on Edward Street, Maddington. More than 300 red tailed black cockatoos were counted during the 2018 Great Cocky Count. Linc claims it will mitigate the impact, but multiple submissions have been made on the referral which question the development and call on the Minister for the Environment to declare it a controlled action, subject to conditions.

The City of Gosnells is the relevant local government authority and has already approved key components of the MKSEA.  One of the problems is that approvals are proceeding piecemeal and there is insufficient consideration of the whole area as an interconnected landscape.

There have been few opportunities for members of the public, or the scientific community, to have their say.  With so much at stake, a public environmental review is best way to ensure the needs of the environment are considered.  A community-based campaign is now underway with peaceful protests outside Gosnells Council meetings.

It is a critical time for action to preserve the GBSW by preventing irrevocable changes to a biodiverse region where we are only beginning to understand its importance.

What can you do?

Sign the Conservation Council petition.  Connect with the community campaign.

Read about the issue and the latest protest action in WAToday