Note:  The Friends of Allen Park Bushland Group Inc in Swanbourne have changed their name. We are still the same group of people but have elected to change our name to Melon Hill Bushland Group Inc. This has come about because the umbrella group, Friends of Allen Park (FOAP) has often been confused with the bushland group because of similarities in names. FOAP is an informal community group that formed in 1993 following a court injunction that overturned an over 55’s development proposal on an area of bushland in Allen Park. This was an awakening for the community; the bushland didn’t have a voice or the recognition it deserved. In 1996, the first management plan rolled out and the Friends of Allen Park Bushland Group was formed to play an important role in conserving and connecting bushland remnants in the Allen Park region, working together with the City of Nedlands conservation officers.

Because our focus is on conserving and enhancing the bushland, we sometimes hold different positions on issues from the Friends of Allen Park group and this has caused understandable confusion in the community, the media, our councillors and some official bodies. Friends of Allen Park continues to advocate for our community in Swanbourne canvassing and representing opinion among residents of the Allen Park area on a wide range of issues.

So to clarify our purpose and separate identity we have formally changed our name to the Melon Hill Bushland Group Inc.

Why did we choose the name Melon Hill Bushland Group? Those who frequent the Swanbourne area may have walked through the bushland behind Swanbourne Beach, over the crest of a large dune that locals fondly call Melon Hill. As one of our cherished members, and Fellowship of Australia writer Peter Bibby quotes so eloquently, “This hill is beautiful. It is the jewel in the crown of Allen Park. ….the great view from here is the uninterrupted sweep from such an elevated position down to the glory of the Indian Ocean to the west and a very clear Rottnest Island”. This dune stands around 40m above sea level and also affords views to the City, and beyond.

In researching the area, it was found that the hill was named around 1927, much earlier than imagined. We as custodians now aim to have the hill named more formally.

Did you know that a retirement village was to have been developed on what locals call ‘The Walkway’, back in 1994?

It took a band of tenacious Swannie residents a year and a half to halt the process and win back the Tuarts and Marris that stand so magnificently on the Walkway today.

Allen Park is located in Swanbourne, in Perth’s western suburbs. The Allen Park bushland comprises approximately 8 hectares, some 40% of the Park’s total area. The entire park is within 1km of the Indian ocean and stretches inland from the coastal foredunes, through coastal heath and open tuart-peppermint woodland to the eastern fringe including Jarrah and large Marri trees some hundred years old. The dominant landscape feature of the park is Melon Hill, a 40m high dune with magnificent 360 degree views including Rottnest Island and the city of Perth.

Until 1991, Melon Hill was utilised as part of the coastal defence system. A concrete pillbox installation was removed and the area became reserved for public purposes, but remains Commonwealth land under management by the Department of Defence.

The Allen Park bushland provides linkages and corridors to adjacent and nearby bushland. BushForever site 315 is a critical link between the extensive coastal reserve and Melon Hill. Successive years of funding by NHT between 1997 and 2001 ensured that degraded areas were revegetated to secure linkages between fragmented areas of Allen Park.

Those who have visited Allen Park will know that there’s an olde-world charm about the group of buildings associated with the history of coastal living. The Fellowship of Australian Writers’ two cottages: Tom Collins House, Mattie Furphy’s House as well as Tom Fricker Cottage and the Allen Park cottage are nestled below Melon Hill in a woodland setting that affords quiet enjoyment and contemplation. Giant Marris, Tuarts and Jarrah surround the precinct and a little amphitheatre “The Hollow” is well loved.

Our aim is to preserve this special pocket of coastal bushland in a city where urban remnant bushland is under increasing threat from urban expansion. We work to regenerate degraded areas, control erosion, remove exotic species, and protect wildlife by improving the habitat for fauna, flora and fungi. We also want to share our experiences, and encourage people to join us in our endeavours.

Melon Hill Bushland Group meets on Tuesday mornings, 9-11am, and the first Saturday of the month between March and December for hands-on bush regeneration within the Allen Park bushland reserve. A watering roster continues right through summer into autumn.

The MHBG is a friendly bunch of people who don’t mind getting their hands dirty. We meet for a couple of hours of work in the bush before a morning tea.

It’s a lot of fun and you meet more people in the community. You get such a sense of belonging to the bushland when you have made a small contribution to caring for it. Many people hesitate to put up their hands as they think they will be asked to commit to a lot of work. But even the smallest amount of support is good. Even if you just join up (membership $15 / family) and don’t ever come to the work days but just get the newsletter and show your interest, that’s fine.

Send us an email at melonhillbg@gmail.com

May 15th  9-11am Nedlands’ Volunteers Appreciation Day at Point Resolution

June 7th  9-11am Planting and Tuesdays through June.

The City granted use of the Allen Park cottage as a base for the bushland group given that the volunteers provide a considerable service to the community. The cottage served the community well and was vacated in July 2021, when it was announced that restoration works were imminent.

The cottage was built in 1913 and is a wonderful community asset though in need of repair. Fortunately, an 11th hour amendment to a recommendation before Council averted demolition of the cottage. A Heritage Architect has been engaged to report on the building and its back to the drawing board.  There is urgency in finding additional funds to shore up the building and bring it back to its former glory.

Without people who care, this local treasure would have already been lost forever to commercial development. Read on…..

A development proposal has been lodged with the SDAU to build a Children’s Hospice on the old bowling greens at Allen Park. The excision of 5000 square metres from the A Class Reserve was made to pave the way for a 7 bed hospice for children with life-limiting health conditions.  The community has grave concerns for the safety of its patients and staff once it is built as it lies in close proximity of the bushland deemed BAL FZ by DFES.  View the application on line at    www.consultation.dplh.wa.gov.au

Historic moment for Allen Park – the road traversing A Class reserve was closed  at the end of July 2016, with a boom gate placed in position across Sayer Street. Although it remains an access route for emergency services, it is now a safe passage for park users as well as bobtails and variegated fairywrens, which flit busily across into the Boobook Sector at the north eastern end of Allen Park. 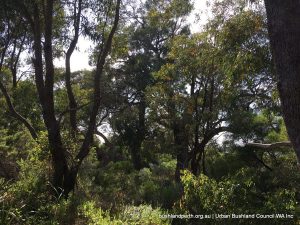 The Friends of Allen Park community group emerged as a result of a crisis. Early December 1993, 5 residents adjoining the walkway/ cycleway (between Wood Street bend and Sayer Street) received a letter from the council giving preliminary notice about a proposed development of the site.

A week later a councillor showed plans of 2 different concepts to these people. A public meeting was called on the 13th December, with 44 people attending (and 10 apologies). On the 22nd December, a petition was signed on the walkway, requesting that the council did not proceed any further until a special electors meeting was held.

The meeting was held on 24th January 1994 and 50 people attended. Submissions to preserve the walkway were received. 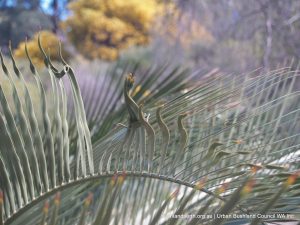 At this point a residents’ consultative committee was formed, which then became the Friends of Allen Park (FOAP). The purpose of the group was to establish a community view of the use of public land in the Allen Park vicinity, and to promote genuine consultation about current land use and issues between the community and the council. The FOAP sought amendment to the Town Planning Scheme as the use of the walkway was so apparent that it ought to have been included into the Parks and Recreation Reserve, and not to be developed as a “retirement village” for the over 55’s.

Although the Sayer Street site was designated in 1977 as a crown grant for the purpose of homes for the aged, it had not been used for that purpose within a reasonable time frame. This scheme did not meet the criteria.

Over the next 10 months the FOAP and council were at loggerheads. Dissatisfaction with council over its intent to proceed with the proposed $14.5 million development, regardless of community concern, the FOAP grew in numbers. It also became apparent that a few Councillors had a vested interest in the project, and that a deal had been made – a management agency had been appointed without going through the tender process. This led to a meeting with Paul Omodei, the Minister for Local Government to express concern that all aspects of the process were dubious. The Minister later requested the council needed majority approval of ratepayers (citywide) to go ahead with plans for development. A solicitor was engaged by some locals to investigate and expose the flawed administration by the council. On the 22nd December 1994, a Supreme Court injunction was granted against council preventing an agreement on the management of the village taking place.

On the 23rd December, the FOAP overturned the sign on the walkway. The saga came to an end when on the 27th March 1995, Nedlands Council, by then under enormous scrutiny, collapsed due to the resignation of 7 Councillors. The Minister then appointed as an interim measure an Administrator, John Gilfellon, to undertake the duties of Council. On election of the new Council the project was thrown out. Since then the walkway has been rezoned as recreational.

In the meantime the FOAP has flourished and accomplished extensive bush regeneration work in the different sectors of Allen Park north and south of Sayer Street. Bushland activities became more formalised, and managed by what later became the FOAPBG Inc (Friends of Allen Park Bushland Group). A Management Plan was adopted in 1996 and a proportion of Allen Park was included in the National Trust of Australia (WA) List of Classified Places.