Blackwall Reach Reserve, and Point Walter Bushland both comprise parts of Point Walter Reserve gazetted for recreation. It is approximately 20 hectares in size. The reserve is vested in the City of Melville. Blackwall Reach Reserve is bounded by Honour Avenue along its eastern boundary fairway, and the Swan River along its western boundary. It is a Bush Forever site.

To the local Aboriginal people the Blackwall Reach/Point Walter area is known as Jenalup or Dyundalup. The most sacred part of the area is the cliffs along Blackwall Reach. In Aboriginal culture it was traditionally a place for women and children. Before white settlement the Beeliar family group (clan) occupied the area. The Beeliar clan is part of the Whadjuk, being one of the 14 language groups, which occupy the Nyungar region in the South-West of WA.

One of the many dreaming trails which run along the Swan River passed through the area now known as Point Walter and Blackwall Reach. The Swan River is highly significant to the Nyungar people, as, in the dreaming, the river was made by the Waugal rainbow serpent. The dreaming trail on the southern side of the river is the Yorga (women’s) trail and the men’s trail is found on the northern side. The sand bar, which stretches out from the point, is the connection between these two trails. 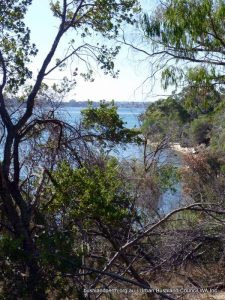 In the Spearwood Dune System, leaching has occurred causing the carbonate to precipitate below to form hard compact limestone. At Blackwall Reach this limestone is exposed at the surface.

One of the most prominent features of the Blackwall Reach Reserve is the limestone cliffs that rise eight metres out of the Swan River. The cliffs have been formed by the eroding processes of the river, which flows from the wide expanse of Mosman Bay into the narrow gap of Blackwall Reach.

Rainfall has caused the limestone to be deeply attacked physically and chemically producing frequently sharp points and ledges. The soil in the reserve is predominantly brown sand. There is deep yellow sand in the vicinity of the adjacent practice fairway. 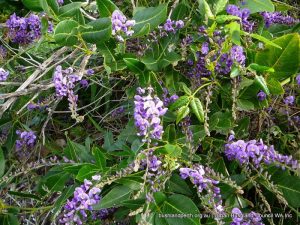 Scattered throughout and along the eight metre high cliffs is a variety of vegetation adapted to living on limestone and with salt spray. These include Olearia axillaris (coast daisy bush), Rhagodia baccata (berry salt bush), Alyxia buxiflora and Clematis microphylla (old man’s beard). 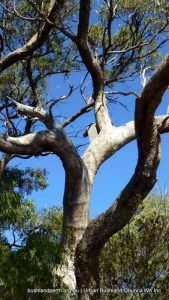 The tuart woodlands occur in a variety of locations throughout the reserve. The main areas of tuart are at the southern and northern ends of the reserve. The species is also found around the cliffs and some limestone outcrops, together with peppermint trees. There are some magnificent old tuarts in the reserve. The other woodland areas in the reserve are mainly dominated by jarrah and marri with occasional tuart.

Recreational opportunities abound at Blackwall Reach. Choose from: easy walking in a bush environment, family picnicing, cycling along the dual use path, pumping the legs in a truly scenic setting, nature observation, Point Walter Spit and adjacent amenities…it’s all there.