Baigup Wetlands is a very interesting, varied and complex site in its history, current state and potential. Approximately 1 kilometre in length, 200 metres wide and 16.4 ha. in area. it lies along the Swan River below Stone Street on the Maylands/Bayswater border. It is great birding location, with an abundance of both wetland birds and bush birds.

Baigup Wetlands is part of Bush Forever site No. 313 which includes both sides of the River from the east end of Maylands Peninsula to Garratt Road Bridge. It is also part of Precinct 9 (Ascot to Guildford) in the Swan Canning Riverpark. Baigup is registered in the Directory of Important Wetlands in Australia and is subject to protection under the Commonwealth Environment Protection and Biodiversity Conservation Act 1999. The Bush Forever site description is here.

Baigup Wetlands Reserve has been identified by the Swan River Trust as Priority 1 vegetation. The Reserve contains high value fauna habitat and is part of a regionally significant ecological linkage. The Reserve is used by the community for passive recreation but has been subject to a number of severe disturbance factors leading to environmental issues at the site, including acid sulphate soils and ponding water. 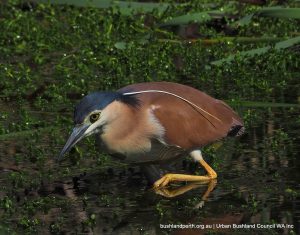 For a fairly small reserve, and only five kilometres from the Perth CBD, Baigup Wetlands holds an extraordinary variety of birds, both bush birds and waterfowl, with coastal birds thrown in.  Over 100 species are recorded for the site and the regular quarterly surveys usually count between 40 and 50 species for each survey.

Many of these birds are represented in the two bird galleries below – all were photographed at the Wetlands: 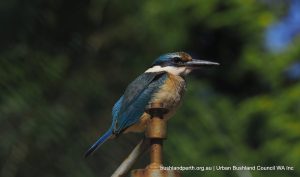 The Reserve was used historically by the Nyungar people who would have likely used the marshy river flats and camped on higher ground. After European settlement sections were used by market gardeners and for grazing of animals. In the 1970s the land was acquired as a road Reserve and for parks and recreation. Subsequently the road reserve was removed and the whole area is now reserved as Parks and Recreation in the Metropolitan Regional Scheme.

In 1986 the Dampier to Perth gas pipeline was laid through the Reserve and the raised track used during construction of the pipeline was subsequently paved as a footpath and cycleway. In the 1990s another track was created along the northern boundary of the Reserve to allow the laying of Water Corporation pipework. The Reserve had also been used as a receiving point for drainage, including road and property runoff.

The northern portion on the landward side of the path now retains significant freshwater from numerous springs and stormwater outlets and has become a woodland swamp. The southern portion on the river side of the dual-use path is still influenced by tidal flood from the Swan River and contributions from the stormwater overflows from the wetland, thus creating a brackish wetland system. Two artificial lakes were constructed in 2000 (the eastern Primary Lake) and 2001 (the western Secondary Lake) to enhance the aesthetic value of the Reserve while providing a permanent water habitat for fauna and flora. 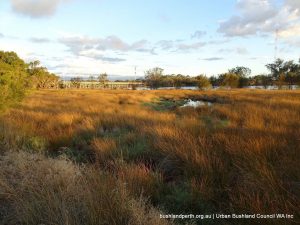 The key vegetation element of Baigup Wetlands is the coastal salt marsh community which is listed under the Environment Protection and Biodiversity Conservation Act 1999 Act as a Threatened Ecological Community (TEC) ‘Subtropical and Temperate Coastal Saltmarsh’. Subtropical and Temperate Coastal Saltmarsh occurs within a relatively narrow margin of the Australian coastline within the subtropical and temperate climate zones. The physical environment for this community is coastal areas under regular or intermittent tidal influence. It typically is restricted to the upper intertidal environment.

This TEC was likely once present throughout much of the Swan River Estuary; however, it has probably declined in the area by over 50 %.

Access is from the Kelvin Street/Swan View Terrace junction in Maylands (limited street parking only) or from A.P. Hinds Reserve (enter from car park at the end of Milne Street. A joint use walkway/cycle path runs from the car park, under Garratt Road Bridge and right through the reserve to Kelvin Street.

About Subtropical and Temperate Coastal Saltmarshs…