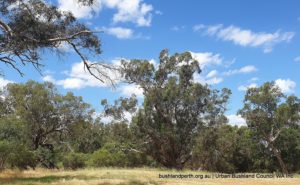 The walk indicated on the first image in the gallery below takes visitors through an outstanding stand of old growth Flooded Gum riverine woodland alongside the lower Helena River and adjacent river flats.

Flooded Gum (Eucalyptus rudis) grows to up to 20 metres in height with rough, box-type bark on lower, large branches and smooth grey bark higher in the canopy. White flowers occur from July – September and the foliage has a grey-green to bluish colour.

Old growth trees can have a diameter of up to two metres and there are a number of such specimens in this Reserve.

Included on the route is a short loop encompassing a semi-permanent pool. This pool can hold good numbers of waterfowl in season.

The Reserve is also habitat for numerous bushbirds which can be heard calling throughout. See here for a list of birds recorded at this site.

Guildford was established in 1829 at the confluence of the Helena River and Swan River, being sited near a permanent fresh water supply.

During Captain Stirling’s exploration for a suitable site to establish a colony on the western side of the Australian continent in the late 1820s, the exploration party of boats found a fresh water stream across the river from the site of Guildford which they called Success Hill.

Guildford was originally the centre of the Swan River Colony before Perth succeeded in being the dominant location of the Swan Coastal Plain.

A Guildford Town Trust was established in 1838, but ceased to function within a couple of years.It was reconstituted in 1863, and became the Municipality of Guildford in 1871. 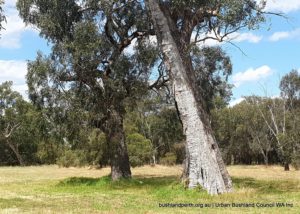 Guildford was originally the political centre of what is now called the City of Swan. The original council chambers have been converted to a library. Alongside the library stands the town hall; behind this is the stables built for the councilors while attending meetings and as a depot for council equipment.

These stables have been converted and are now the home of the Garrick Theatre, which is the oldest operating theatre group in Western Australia. The original structure is still visible. The roof still has its original shingles in place, though from the outside they have been covered by corrugated galvanised iron.

Features that make Guildford special are:

Plantings around Guildford survive from early settlement in private gardens, parks and floodplains.

There are a number of entry points from the surrounding streets but access is possibly easiest from the children’s playground on River Bend Road opposite Janeville Place. This will locate you at the eastern end of the walk.