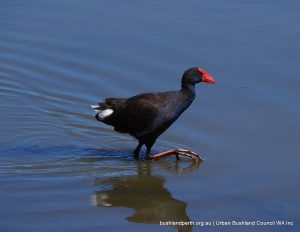 Lake Claremont is a delight to visit, particularly between August and January when birdlife is abundant.

Once badly degraded, through the highly successful partnership between the Friends of Lake Claremont and the Town of Claremont, the Lake is now a shining example of the benefits of a major environmental rehabilitation program.
Lake Claremont is a Conservation Category Wetland and a Bush Forever Site. 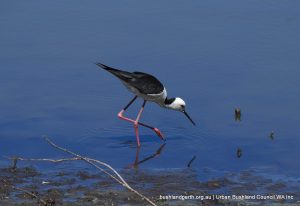 There are over 100 species of birds recorded at Lake Claremont. A tremendous record has been maintained with bird censuses being carried out since 1993. Three of the most common waterbirds include the Pacific Black Duck, Grey Teal and Eurasian Coot and one of the rarest – the Freckled Duck.  Birds in and Around Claremont.

The richest period for bird observation is November to January, this being due to several factors including the presence of breeding pairs and young and the change in habitat structure brought about due to the natural decline in lake water levels.

The species’ diversity and abundance are generally at their highest in January when the lake is nearly dry. The most valuable habitats for birds in the area are those that provide adequate shelter for breeding. The shallows and mudflats are valued by birds including the five species of local wading birds recorded at Lake Claremont. 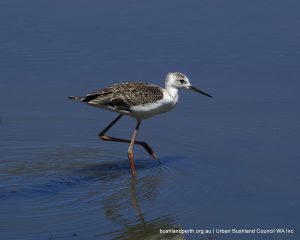 Lake Claremont lies in a depression in the Spearwood System of coastal sand dunes. It is a true swamp in that it lies above but separate from Perth’s underground aquifer. This subsoil water flows continuously towards the river and ocean in a north east to south west direction. Several swales have been made in order to improve water quality.

The swamp lies in a valley between coastal dunes where, on the west side of the swamp, the ground rises rapidly from 1.5 metres to 12 metres. Immediately prior to 1950, the swamp at high water mark enclosed an area of approximately 20 hectares. During the 1950s and 1960s areas were reclaimed and this reduced the area of the open water to approximately 15.7 hectares at high water mark.

The soil of the coastal plain near Claremont is a fine graded silica and calcium carbonate sand. Water action on the carbonate has in places cemented the sand into sandstone mass calcific sheets and pinnacles. In the actual vicinity of the swamp there is a thin deposit of marl, consisting of detrital material settling out of solution from swamp waters. 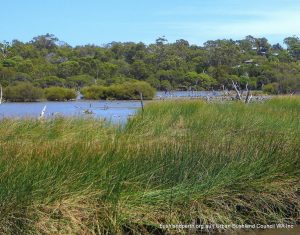 The Lake is a surface expression of the superficial aquifer, with groundwater entering the Lake on the north-eastern side, flowing through the Lake and exiting on the south-western side.

The pre-European vegetation of Lake Claremont is Karakatta Complex – Central and South, however the majority has been cleared through recreation and residential development. The original vegetation at Lake Claremont would have consisted of a central swamp zone of Paperbarks (Melaleuca rhaphiophylla), with Tuarts (Eucalyptus gomphocephala) and Grass Trees (Xanthorrhoea preissii) surrounding small water holes. The Bush Forever Report 2000 classified the vegetation surrounding the wetland as a Melaleuca rhaphiophylla Low Closed Forest.

Lake Claremont can be accessed from many points via the local roads network. There is a dual use path surrounding the east and northern shores and pedestrian pathways circumnavigate the entire Lake.