Lightning Swamp is one of a number of major reserves located on the Bassendean Dune system north of Perth. It is 70 hectares in size; an A class reserve, located 11 km NE of Perth between Malaga Drive and Reid Highway in Noranda with best access via Matthews Close.

It contains a range of mixed bushland communities and is representative of the natural environment that once covered the Swan Coastal Plain before urban development cleared  vast tracts of Perth’s bushland.

The bushland provides habitat to over 125 native fauna and avian species. A number of regional migratory birds, including the threatened Carnaby’s Cockatoo, visit this bushland corridor due to its healthy and diverse vegetation.

Lightning Swamp comprises a seasonal wetland, damplands and a perched wetland which support a higher diversity of aquatic and fringing vegetation in comparison to permanent wetlands. The site provides habitat to at least seven endemic frog species within the wetlands and riparian zones. 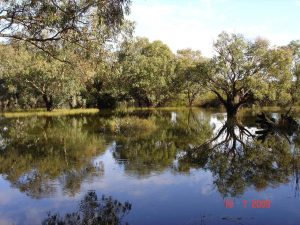 The perched wetland in the north east is in good condition. It tends to be damp all year round due to its peaty clay base with poor hydraulic conductivity.  Perched wetlands such as this (i.e. wetlands not connected to the ground water) are relatively rare on the Swan Coastal Plain.

The western wetland is shallow and its gradual slope has lead to the growth of fringing vegetation. The Wonga Road Main Drain traverses the site west to east. 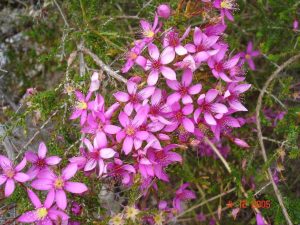 This area is typical of many Banksia woodlands of the Bassendean sands.  It contains declared rare flora.

The perched wetland in the north-east corner is surrounded by banksia woodland.

This zone is in good condition. Species such as Baumea articulata and Baumea arthrophylla dominate with Moonah (Melaleuca preissiana) forming part of the littoral community.

This is a transition zone between the banksia woodlands and the two seasonal wetlands.  Its dominant flora are Marri (Corymbia calophylla),  Moonah (M. preissiana) and the Common Sheoak (Allocasuarina fraseriana). 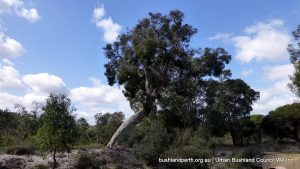 This area is similar to zones 1 and 4. It is generally dominated by Moonah, Marri, Hollyleaf Banksia and Nuytsia floribunda. The water tolerant species (M. preissiana, B. littoralis) are interspersed with woodland species. A shrub layer of White Myrtle (Hypocalymma angustifolium), Balga and Purple Flags form a mixed understorey. 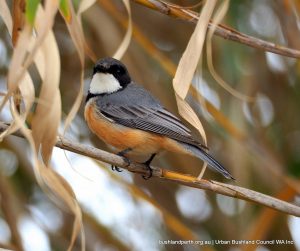 The Lighning Swamp wetlands attract a large number of waterbirds, whilst the banksia woodland, heathland and riparian fringe of the wetlands provides an ideal habitat for a large complement of bush birds.  Endangered Black Cockatoos are often sighted feeding and roosting in banksias and Flooded Gums.

The ephemeral swamps, with their inundated thickets, act as important roosting and nesting sites for waterbirds such as the Eurasian Coot, Purple Swamphen and Australian Wood Duck during winter.

Material presented here has been adapted from Lightning Swamp Bushland  Management Plan prepared by The City of Bayswater and the Friends of Lightning Swamp.