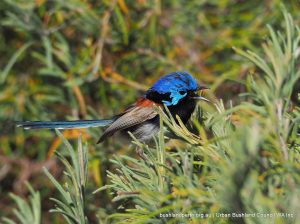 The South Mosman Park Bushland is located within the Town of Mosman Park and is situated adjacent to the Swan River. It is a part of the Bush Forever Site 335 (Chidley Point and Adjacent Bushland) and Bush Forever Site 335 (Minim Cove) and is recognised as containing the only population on the mainland in the Perth Region of the species Boronia alata – Winged Boronia.

It also has a National Trust of Australia (WA) classification due to the presence of exposed Marine Shell Beds containing fossil fauna and is one of the very limited numbers of bushland areas on the Swan Estuary that has particular conservation value in providing habitat for fauna and linkage between areas of bushland.

Much of the adjacent area is used for recreation with the bushland surrounded by landscaped parklands.The foreshore is formed by cliff and as such affords little access to the general public. Informal tracks have been made to the water level however they are eroding the site. 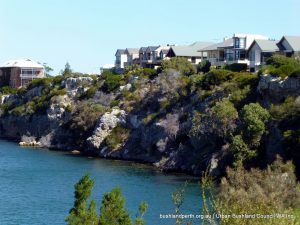 The landscape of the area is made up of Tamala limestone commonly known as Coastal Limestone and dates back to the Pleistocene Age The rock is composed of a cemented dune sand (aeolianite) consisting of shell fragments of marine origin and quartz grains in calcium carbonate.

The Swan Coastal Plain is made up of three dune systems. The Bassendean Dune System, containing low hills and leached infertile soils. This system is the most easterly and the oldest for the three systems.

West of this is the Spearwood Dune System which is younger with higher hills and less leached soils. Even further west is the youngest of the dune systems and known as the Quindalup Dune System. This system is composed of calcareous dune sands forming along the coastline.

The study area is found within the Spearwood Dune System. Topographically this system is more variable and undulating and as such contains greater relief. The hills are higher and the soils are younger. It is within this system that the coastal limestone has been formed by a process of leaching and deposition of surface soil carbonate.

The soils of the Mosman Park area are derived from the weathering of the limestone rock, giving rise to a soil profile which consists of shallow yellow and brown sands overlying limestone. There are deeper soils that occur in the valleys or swale areas while the shallow soils are associated with the more exposed and elevated limestone hilltops.

Three pre-European broad complex types are associated with the area

The shallow soils over limestone, exposed windy environments and limited nutrients give rise to typical limestone heath communities. These are associated with the limestone hills, ridges and parts of the cliff face forming the river foreshore. Generally the heath communities are low and have a diverse flora composition. Many species are represented including Acacia cuneata, Acacia rostellifera, Acacia xanthina, Grevillea thelemanniana, Melaleuca huegelii, Melaleuca systena, Spyridium globulosum, Templetonia retusa and Xanthorrhoea preissii.

On the deeper soils under more sheltered conditions woodlands to open forests of Tuarts (Eucalyptus gomphocephala) as the dominant species along with Jarrah, Marri and in some cases Limestone Marlock (Eucalyptus decipiens). This community also supports a middle stratum containing such species as Banksia, peppermints (Agonis flexuosa), Christmas tree (Nuytsia floribunda) and Sheoak (Allocasuarina fraseriana). Shrubs such as Jacksonia sternbergiana, Hakea prostrata,
Banksia sessilis and Acacia cyclops were also found. A diverse lower storey is also associated with this community.

This community was found on the cliffs and dominated by Rottnest Island Pine (Callitris preissii). Out of all the communities this one no longer exists in its true form due to repeated fire and clearing. Other species found in this community include the, Acacia xanthina, Agonis flexuosa, Eremophila glabra, Phyllanthus calycinus and Spyridium globulosum.

Recreational opportunities abound at and around Mosman Park Bushland. Choose from: easy walking in a bush environment, family picnicing, cycling along the dual use path, pumping the legs in a truly scenic setting, nature observation, …it’s all there.

The site has important passive recreational values for the local and more regional population of the area. The dual use path is a Regional Recreation Path which is part of the Perth Bicycle Network and provides a link along the river for both cyclist and walkers.

The area is regularly used by local for walking, exercising and social interaction. The foreshore is also used for recreational fishing and canoeing.

The cultural values include the cliffs which expose a rich fossiliferous shell bed that was deposited towards the latter part of the Pleistocene Era. The bed is reported to be one of the best preserved and most informative deposits of its age in  Western Australia. The cliffs are listed by the National Trusts of WA and are regularly used for teaching purposes.

The site also adjoins the heritage listed Aboriginal camp site at Minim Cove. This site has been ascertained to be over 10,000 years old through carbon dating of Aboriginal artefacts found at the site.

The Friends of Mosman Park Bushland look after this place.