Star Swamp Bushland is a 96 hectare Class-A reserve, vested in, and managed by the City of Stirling. It is located 15 km north of Perth and comprises four hectares of semi-permanent freshwater lake with paperbark trees and 92 hectares of banksia, Tuart, Jarrah and Marri woodlands, and areas of low heath.

The Reserve is a declared Bush Forever site [no. 204] that has been set aside for the purposes of conservation, passive recreation and education.  It is a remnant of the once extensive chain of wetland lakes and swamps which filled low-lying areas between ancient sand dunes.

Start your enjoyment of Star Swamp from the parking area at Groat St, North Beach.  The Reserve has many walking trails including the 1.4 km  Star Swamp Heritage Trail.  It also houses the Henderson Environmental Centre which gives the whole community a focal point for activities within the Reserve.

Star Swamp provides a breeding site and sanctuary for both waterbirds and other bushland bird species with over 80 species of birds having been recorded. The bushland is also an important habitat for species of reptiles, insects, and spiders.

The main flowering period is between August and October, although there are plants in flower all year round. Over a dozen species of orchids occur in the bushland and several hundred flora species have been listed.

Please view the Friends’ YouTube videos  for more insights into this remarkable place. The videos have been produced by Grey Eyed Films and feature David Pyke demonstrating and speaking about various features of Star Swamp. 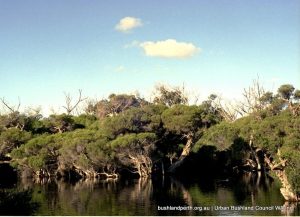 From the mid 19th Century, the area that became known as the Star Swamp Bushland Reserve was part of a dairy and cattle lease held by J H Okely of Wanneroo. The origins of the naming of the swamp are unclear.

The area was used as a camping area and watering place for drovers using the Coastal Stock Route.  In the early 1900s, the area west of Star Swamp was sub-divided for housing development, gradually expanding to be a popular seaside holiday destination.During the Second World War, a squadron from the Australian Army 10th Light Horse Division was stationed nearby on coastal watch duties, and used the swamp to water their horses.

In the 1970s, local residents waged a strong campaign of community action to prevent Star Swamp from being developed for housing.  This eight year campaign was supported by local politicians, academics and environmentalists and resulted in the gazettal, in 1985, of the Star Swamp Bushland as an A-Class Reserve.

The material presented here is sourced from the Star Swamp management plan and from the Friends of Star Swamp.

All Gallery images  have been contributed by David Pike who retains absolute copyright.