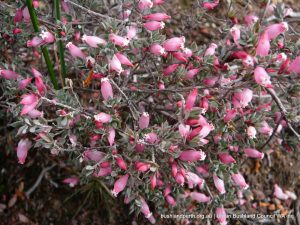 Jane Brook flows through the centre of the park, and from vantage points, the edge of the Darling Scarp can be seen dropping away to the coastal plain.

Most of the park is laterite, but where streams have cut into the surface, rounded outcrops of granite or the more angular dolerite can be seen.

The Park is described in more detail here.

John Forrest National Park is set in jarrah forest still largely in its natural state. It is a Bush Forever site.

The uplands are dominated by jarrah and marri. The valley floor features flooded gum, swamp peppermint and paperbarks. On the valley slopes two smooth-barked trees, wandoo and powderbark, intersperse with jarrah and marri.  Smaller trees include bull banksia, sheoak and snottygobble.

A common feature of the park is its granite outcrops fringed by heaths. As the soil becomes shallow, annuals and herbs abound, with sundews, orchids and resurrection plants growing through the moss swards. 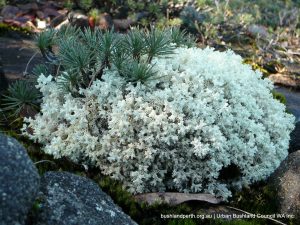 John Forrest National Park is very important for conservation and includes a range of flora and fauna where species are gazetted as threatened and where other species are limited in their distribution.  The flora and fauna are representative of the ecological ecotone between the Swan Coastal Plain and the Darling Plateau.

John Forrest National Park has significant cultural and recreation value to the community.  It is an area rich in Aboriginal culture and also has significant heritage value for the State with relics associated with the east-west rail route including the tunnel, bridges, embankments and station remnants.

The material presented here is largely sourced from the Department of Environment & Conservation’s Management Plan:  John Forrest National Park 1994 – 2004.     The Plan provides much greater detail than the brochure download available above.

The Friends of John Forrest National Park look after this place.